This is not sponsored in any way. These are just my opinions of different music players and services for various Linux distros (namely, Fedora and Ubuntu).

I’ve been a Linux user for at least seven years now and, in that time, I’ve tried various means of making my computer produce some tunes. I am not counting anything that requires a tab be open in a browser and I am only listing those that meet my wants, and that includes having a decent GUI, integration with media controls, and notifications with album artwork and playback controls.

When it comes to streaming, I’d really like to use the same service on my Android phone so that all of my preferences and playlists carry over, so the ability to download music is essential. For ad supported services, the frequency and type of ads can really make a streaming service unusable, since I really don’t want to pay for the data usage for an HD video ad to play while I’m driving in an area with poor reception.

I was pleasantly surprised when I found out that Spotify has a client for various Linux distros, including both Snap and Flatpak packages. I’ve been listening to Spotify a lot, but probably won’t continue after my free trial has expired. The ads are extremely annoying and, despite offering nothing additional, Spotify is among the more expensive services.

When it comes to music streaming services, I think that Spotify is the absolute best. And I say that after having tried out quite a few. Spotify does the best job of introducing me to new music I will like while allowing me to play any song or album I want. It also allows for downloading music for offline playback if you have a premium account.

As an example of why I think Spotify is the best music streaming service, today I saw a new release from one of my favorite bands at the very top of my “Release Radar.” I haven’t seen the song anywhere else yet, but I have it in my library and my favorites playlist on Spotify.

The interface could use some work in more than just an aesthetic sense. It lacks consistency in whether or not you can like or dislike a song. The shuffle and repeat buttons aren’t there half the time. I still have no clue what the differences are between my different daily mixes or why I have three of them despite each containing roughly the same mix of different genres.

In my opinion, Spotify has a glaring flaw in not providing any means of purchasing music. Given the fact that Spotify is the only entry on this list that has local playback in addition to streaming with the ability to download, I would expect them to be the most likely to provide this. Streaming is great, but I’d rather keep access to my music library if I decide to switch to a different service.

For now until my free trial has ended, Spotify is what I’m mainly using to listen to music. And, even though it’s among the more expensive subscriptions, I think it would be my first choice if I ever decided to pay money for music I didn’t get to keep. I will probably continue to use it after the trial ends, but lack of downloading music and the cost of data to stream on my phone will significantly cut my usage. 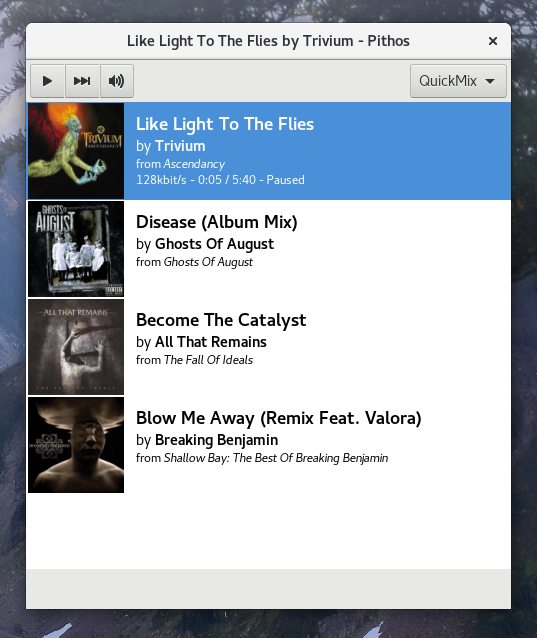 Pandora does not have an official client for Linux, but Pithos more than makes up for that. Not only does it provide a clean and simple interface for listening to music, but it can also connect to Last.fm as well as Libre.fm for “scrobbling” and it can be set to run in the background when closed. I think it also skips ads… I like the lack of interruption in music, but don’t like the feeling of stealing something (I’m all for ad blockers because ads in browsers are also trackers and a threat of malware, but an ad supported service is something quite different).

Pandora, unfortunately, does not really try to be anything more than online radio. When your favorite band releases a new album, you can’t go to Pandora to listen to the whole thing. I think they do pretty well at the radio thing, but I’ve found it to get kinda repetitive.

Pandora does have a cheaper subscription option that removes ads and provides higher quality audio (and some offline playback for mobile), but their premium subscription is as expensive as anything else while still only being radio.

As for Pithos itself, I think its simplicity works well. You get basic controls, some playlist management that includes the ability to create and delete playlists, and a few songs in a queue. Thumbs up/down can be found in the notification tray but there are also keyboard shortcuts. Yes, it does seem odd that the thumbs up/down buttons aren’t anywhere in the main GUI next to the pause and skip buttons as you’d expect.

Pithos is great for streaming music while being very light on resources. Even though I don’t like Pandora’s streaming service as much as Spotify, I’ll still use Pithos instead when I’m multi-tasking for that reason and being able to stream music while it’s running in the background.

GPMDP is an electron app that is essentially the web version of Google Play Music. It has ton’s of extra features though, some of which I haven’t tried out. I’m kinda interested in voice controls, and I have no clue what the JSON API is for or how to use it.

I’ve increasingly come to dislike electron apps though, since they are ultimately built using Google Chrome, which is a memory hog. I’ve noticed that electron apps also take up too much memory for my liking, though that’s largely because I’m running on only 4 GB.

As far as the Google Music service, it’s among the best. A paid subscription here carries over to a bunch of Google things, like YouTube. If I were to include other factors other than the music service, it would outrank Spotify, but it loses when you consider only the music streaming service and factor in the lack of official Linux client.

As a point in Google Music’s favor, they support radio stations (based on mood or artist), podcasts, playing entire albums, and also purchasing music.

And then, there’s the Google factor. I don’t just mean the depths of information Google has about all of us, but also the dangers of losing access to so much if your account is ever terminated. I’ve heard too many horror stories of accounts being suspended or closed due to policy violations and political correctness. Google has a very obvious political bias and they are actively shutting down those with whom they disagree. I don’t just mean on YouTube — they removed an app from the Play Store because the app refused to ban a particular user.

Regardless of my opinions of Google, the developer did an outstanding job, and GPMDP is amazing at how well it blends Google Music’s interface with it’s own additional features. If I had used voice commands, I’d probably be even more amazed.

Lollypop is different from other entries in my favorite music players because it is just a well-designed, traditional music player for Linux. There is no online music streaming service, just music files (*.ogg, in my case) in ~/Music/. It also supports online radio streaming and rating both songs and albums.

I, like every desktop Linux user, have also used Rhythmbox and a few others, but Lollypop is the king of them all. It has all of the features you need and expect like playlists and scrobbling, but it also has a GUI that isn’t terrible! In my opinion, it should be the default music player on all Linux distros with the possible exception of those designed to be extremely lightweight.

Other Linux music players might have better features or a decent GUI, but never both. I don’t consider them worth listing. They really are either that ugly or stripped-down.

The Future of Web Apps


The Secret to SEO